Among the many hard lessons learned by the Armenians in the 2020 Artsakh War was their inability to mount a cohesive and compelling counterforce to the rampant false narratives disseminated in the international media by Azerbaijan and Turkey. By all accounts, this resulted in a clear bias in favor of these two countries, not only in the foreign media, but also the geopolitical and diplomatic communities. AGBU Young Professionals (YP) of Madrid, Spain decided to take action in the form of a six-day workshop in Armenia called Storytelling in Journalism: From Hard Data to Harder Narratives.

YP Madrid Chair Diran Guiliguian further explained the motivation. “Armenia clearly lost the communications war in Artsakh. That’s because we didn’t have a solid strategy to coordinate our efforts during the war. It’s also because we spent the better part of it talking to each other instead of addressing the outside world. Uncertain about how to approach the issue, it took the advice of a foreign journalist for us to come up with a media training program.”

Happening in Armenia’s southern city of Goris from August 2-7, the program put the energetic team of Ronak Press in a room with budding and working journalists from Armenia and Artsakh to teach them to reach international audiences with stories from home.

A non-profit based out of the Basque Country in Spain, Ronak convenes world reporters working in print, photo and video to cover war stories from hotspots along the 33rd parallel from Western Sahara in Africa to Eastern Baluchistan in West Asia. The group of five has also conducted media workshops for local reporters in Algeria, Libya and Iraqi Kurdistan.

“During the war in Artsakh, I noticed that many local journalists engaged in self-censorship and propaganda to aid the Armenian cause,” says Karlos Zurutuza, the Ronak Press co-founder who initially suggested the program in Armenia to Guiliguian and later led the charge on print journalism. “At the same time, you had battle-hardened war reporters from abroad who, while on the ground, lacked the historical and cultural bandwidth to cover the conflict in a way that didn’t give way to clichés. It’s that vacuum – of an Armenian reporter capable of talking about the issue in an informed and unbiased manner – that prompted the Storytelling in Journalism training,” explains the Basque journalist whose reporting on war in Iraq, Syria and elsewhere has colored the headlines of Deutsche Welle, Al Jazeera, and Middle East Eye.

The workshop was organized in two parts, with the first half of the day spent learning about the theory behind print, photo and video journalism, including the art of pitching stories to the international press and handling a photo and video camera. The second part pushed trainees to hit the streets of Goris to hunt for stories about the local community, who must contend with an Azerbaijani presence at its gates, following the handover of the previously Armenian-controlled region of Lachin. This exercise served as their end-of-program assignment.

The third day was punctuated with a surprise visit from Artsakh Foreign Minister David Babayan, who answered questions about the ongoing situation in the region and the issues faced by journalists in accessing Artsakh. The minister substantiated the partial ban on the media by citing the threat of information leaks that he claimed could further endanger the already fragile security of the area.

Anahit Margaryan Antonyan, 27, is a Ph.D. student researching genocide in Spanish sources at the universities of Cádiz and Granada in southern Spain. On break and in Armenia to explore the archives of the Armenian Genocide Museum and Institute for her thesis, she applied to the training program to “learn to export the many deserving stories of Armenia to the world” in her capacity as the occasional contributor to a local newspaper. “The course taught me to look at the issues facing my country from a less emotional and more objective standpoint so that their coverage may better meet the standards of an international readership,” she says.

For Anush Ghavalyan, 33, an anchorwoman with Artsakh Public TV, the chances of that happening seemed far less likely. “When I first joined the program, I didn’t believe that stories from Artsakh produced by an Armenian journalist could appeal to foreign audiences. I was convinced that they would be brushed off as subjective despite our best efforts to the contrary,” she admitted.

Five days into the training, Ghavalyan experienced a thought revolution. “They helped me understand that it’s not about the nationality of the reporter, but rather the quality of the work being submitted,” she says. “And that’s exactly what we were here to achieve,” adds the photojournalism trainer for the course Andoni Lubaki, who co-founded Ronak Press with Zurutuza in 2016 and whose works have appeared in the Associated Press, Newsweek and The New York Times.

That change of perspective became more obvious to all the participants, according to Jewan Abdi, a staff cameraman and producer with the BBC who led the course on video journalism. He noted that by the end of the training the majority of the students exhibited “a hunger to work and bring about change” in the news industry in Armenia. “I’m sure it won’t be long till we see the names of some of our trainees in the bylines of major publications,” he said.

The program concluded with a certificate handout ceremony joined by AGBU Armenia president Vasken Yacoubian and YP Yerevan chair Haykaz Nahapetyan, who also attended the farewell dinner organized later that evening. “AGBU has always sought out meaningful ways to engage the Armenian diaspora in its projects for the betterment of Armenia. The Storytelling in Journalism program is the perfect example of a Diaspora group, in this case our YPs in Madrid, proving that they are constantly thinking of ways to help improve the country in their respective fields,” says Yacoubian.

The good news about this pilot program in Armenia will undoubtedly spread among local journalists who agree with their Diaspora counterparts that mastering the art of telling the Armenia and Artsakh story to the world is a national priority.

The Armenian General Benevolent Union (AGBU) is the world’s largest non-profit organization devoted to upholding the Armenian heritage through educational, cultural and humanitarian programs. Each year, AGBU is committed to making a difference in the lives of 500,000 people across Armenia, Artsakh and the Armenian diaspora. Since 1906, AGBU has remained true to one overarching goal: to create a foundation for the prosperity of all Armenians. To learn more visit www.agbu.org. 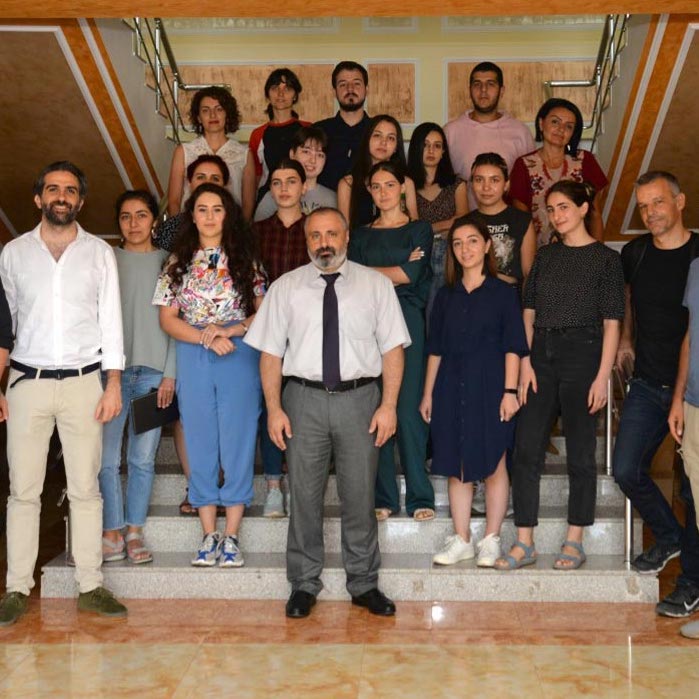